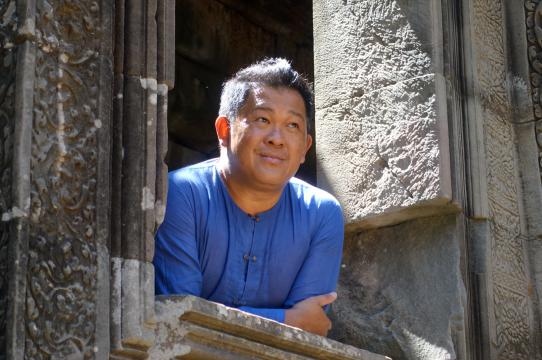 He approaches the study of the material culture of pre-modern Southeast Asia from an interregional perspective, considering it through a comparative lens. More important, he asks how these “ancient” arts and cultures were constructed as part of an academic teleology, always acknowledging when concepts and artistic canons are inventions of the colonial and nationalist periods. Ly’s research investigates the processes of cultural translation and interrogates the construction of historical authority and racial authenticity as it is embedded in colonial writings on Southeast Asian art. The fields of postcolonial, cultural, and visual studies, as well as the discipline of art history thus inform how he theorizes about, writes, and rewrites the threads of Southeast Asian art history and visual culture.

Ly’s intellectual interests, teachings, and writings have evolved from studying the colonial invention of Southeast Asian canonical art and architecture to an engagement with a broadly defined and expanded consideration of the tangible and intangible objects and subjects under the rubric of visual cultures of colonial, modern and contemporary mainland Southeast Asia (Myanmar, Cambodia, Vietnam, Laos and Thailand). He takes a multidisciplinary approach to studying and writing about visual culture of this region and its diapora. His writing is concerned with how contemporary artists of Southeast Asia and its diaspora create works that deal with the difficult issues of memory, exile, displacement and trauma in the post-Vietnam–American War period. In particular, Ly has been thinking and writing about intersections between trauma, memory, nation and diaspora. In his writing on art, trauma, and memory, he draws from a rich variety of media, including photography, paintings, television, films, and material culture, court dance, and the body. Ly employs different modes and styles of writing in the hope that they lend themselves to capturing the sites/sights and experience of visual traces of trauma.

Professor Ly would consider supervising PhD students who are interested in the following topics (not inclusive) in the visual cultures of Southeast Asia and it diaspora:

Professor Ly welcomes creative and innovative dissertation projects that falls outside the normative frame. Please write and inquire at bjly@ucsc.edu.

Catalogs and Essays in a Catalog

"Interview with Boreth Ly on Her New Book, Traces of  Trauma": https://escholarship.org/uc/item/1gb5592r

"The Politics of the Pot: Contemporary Cambodian Women Artists Negotiating Their Roles In and Out of the Kitchen" in Suvannabhumi, vol. 12, no. 1 (January 2020): 49-88: https://suvannabhumi.bufs.ac.kr/suvannabhumi/index.php?pCode=MN200005&mo...

"Of Trans(National) Subjects and Translation: The Art and Body Language of Sopheap Pich," in Nora A. Taylor and Boreth Ly, eds., Modern and Contemporary Southeast Asian Art: An Anthology (Ithaca, New York: SEAP, 2012): 117-129.

“Broken Threads: The Contested Histories of Brahminism in Cambodia and Thailand and the Construction of Ritual Authority” in Pierre-Yves Manguin, A Mani, and Geoff Wade, eds., Early Interactions Between South and Southeast Asia: Reflections on Cross-Cultural Exchange (Singapore, ISEAS Press, 2011): 461-481.

“Picture-Perfect Pairing: The Politics and Poetics of a Visual Narrative Program at Banteay Srei” in Udaya: Journal of Khmer Studies no. 6 (2005): 151-185.

“Remembering from a Crossroad: The Archaeology of Photography, Memory, and Vision in the Art of Dinh Q. Lê” in Udaya: Journal of Khmer Studies V (June 2005): 99-114.

Critical Reviews of Books and Films

Invited panelist and speaker, "Herotopias Interrupted: Buddhist Embodiment in the Age of Digital Media and Global Capital",Religion in the Digital Age: Mediating 'the human' in a Globalizing Asia, New York University (September)

Invite Speaker, "The Ramayana/Reamker on the Sacred Temples of Angkor: Cambodia and Beyond" The ACT Theater, Seattle, Washington (October)

Invited speaker, “The Legacy of Displacement: Memory, Identity, Homeland, and the Refugee Experience in the Contemporary Arts of Cambodia and Its Diaspora”, Henry Art Gallery. Sponsored by the Henry Art Gallery, Center for Southeast Asian Studies, and The Simpson Center for the Humanities, University of Washington, Seattle (November)

Invited speaker, “The Poison Cure: Prevailing Tales of the Serpent as an Embodiment of Khmer (Cambodian) Ethnic and National Identity at Home and in the Diasporas”, University of Washington, Seattle (April)

Invited speaker for a symposium, “A Female Prostitute’s Critique on Social Inequality in Cambodia as Portrayed in Rithy Panh’s Film, One Night After the War” Filmic Interventions in Southeast Asia. Center for Integrated Area Studies, Kyoto University, Japan (November)

Invited speaker for a conference, “Broken Threads: The Contested Histories of Brahmanism in Cambodia and Thailand and the Construction of Ritual Authority,” Conference on Indian influences in Southeast Asia: Reflections on Cross-Cultural Movement, Institute for Southeast Asian Studies, Singapore (2007)

Invited speaker for a series, “Of Border and Battle Lines: A Critique of Art Historical Perspectives on Cultural Geography, Race, Identities, and the Politics of Ownership,” University of British Columbia, Vancouver, Canada (February)

Invited speaker for a symposium, “Maitreya in Mainland Southeast Asia: Visions and Politics” symposium on Visions and Religions, University of Southern California (February)

Boreth Ly teaches a series of thematic courses on the arts of both ancient and contemporary Southeast Asia and its diaspora. Ly’s teaching takes an interdisciplinary approach to his teaching of Asian Art History. He is interested in the intersections between text, ritual, art, aesthetics, ethnography, and religions, especially Hinduism and Buddhism. In addition, his analysis of the “image” and the “object” under consideration in the disciplines of Art History and Visual Studies is informed by theories derived from Cultural, Postcolonial, and Visual Studies, as well as theories of methodology in Art History. Issues addressed in his courses include the cultural constructions of gender, class, the body, race and sexuality. In addition, he is interested in decolonizing approaches to Southeast Asian art history and visual culture. To this end, he is particulartly interested in relooking at the important role Islam and trade routes and networks in Southeast Asia and rethinking the idea of "Asia" its cultural space.

Traces of Trauma: Cambodian Visual Culture and National Identity in the Aftermath of Genocide