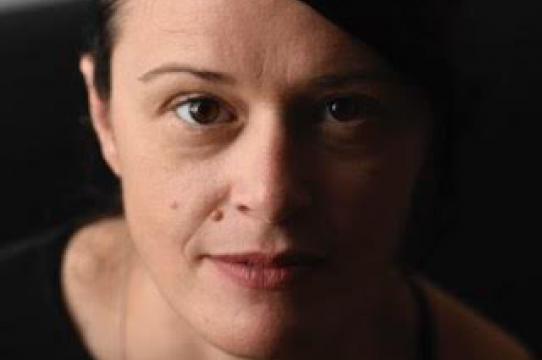 Distinguished graduates travel the world for prestigious job offers, but some find their dream jobs right on campus. One prime example is Rachel Nelson, who earned her Ph.D. in 2016 in UC Santa Cruz’s Visual Studies program. Aside from her role at the IAS, Nelson teaches in the History of Art and Visual Culture Department at UC Santa Cruz.

When Nelson came to UC Santa Cruz as a graduate student in 2010, she was part of the first cohort in the Visual Studies Ph.D. program, which was brand new at the time.

Nelson was excited to join the program because of its intellectual heft and interdisciplinary philosophy. “The department also encouraged me to take classes outside of the department and think about my work in the context of the larger university and the larger world,” she said. “A diverse group of scholars pushed me to reckon with art’s relationships with geopolitics, which has had a lasting effect on my work.”

Nelson said that her training in the Visual Studies program launched her career at the IAS. “This has allowed me great opportunities to build the program and develop new exhibitions and arts programming that draws on my understanding and experience of the strengths of interdisciplinary research at UC Santa Cruz,” she said.

Nelson is planning a nationally touring exhibition about the prison-industrial complex for the fall of 2019. This project will draw on UC Santa Cruz’s scholarship and activism, including work done on prison abolition by UC Santa Cruz humanities professor emerita Angela Davis and the research on the psychological effects of incarceration and solitary confinement by UC Santa Cruz psychology professor Craig Haney. “The exhibition will feature artists working nationally whose voices speak powerfully about the prison-industrial complex and its links to racism in our country,” Nelson said.