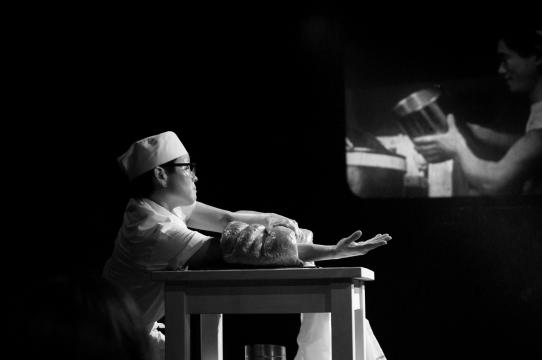 Tina Takemoto is an artist and associate professor of visual studies at California College of the Arts in San Francisco. Her work examines issues of race, queer identity, memory, and grief. Her current project explores the hidden dimensions of same-sex intimacy and queer sexuality for Japanese Americans incarcerated by the US government during World War II. Takemoto has presented artwork and performances internationally and has received grants funded by the James Irvine Foundation and the San Francisco Arts Commission. Her film Looking for Jiro received Best Experimental Film Jury Award at the Austin LGBT International Film Festival. Her articles appear in Afterimage, Art Journal, GLQ, Performance Research, Radical Teacher, Theatre Survey, Women and Performance, and the anthology Thinking Through the Skin. Takemoto is the board president of the Queer Cultural Center and co-founder of Queer Conversations on Culture and the Arts. On occasion, she makes guerrilla appearances as Bjork-Geisha.

Takemoto explores the hidden dimensions of same-sex intimacy and queer sexu­ality for Japanese Americans incarcerated during World War II. Her project Looking for Jiro Onuma is inspired by a dandy gay bachelor who was imprisoned at Topaz concentration camp in Central Utah. Onuma’s modest archival collection contains an array of homoerotic ephemera and some of the only known photographs of adult gay Japanese Americans in wartime detention. Takemoto reimagines a queer mess hall fantasy through a mash up of drag king performance, US propaganda footage, muscle building, and homoerotic bread making. While her outrageous reenactment works to expose the unspoken dimensions of Japanese American queer sexuality, it also highlights the ways in which our affective attachments to the past can open up possibilities for engaging with queer of color history, postmemory, and the archive.