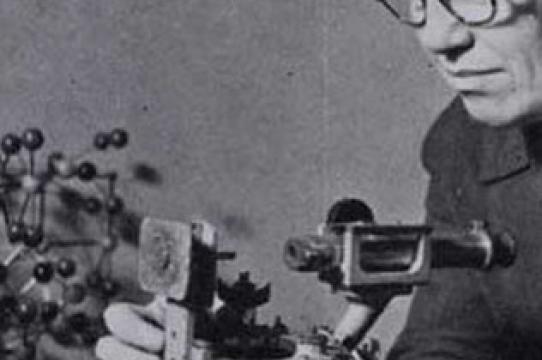 In some pioneering, early work, Donna Haraway drew attention to the metaphor of the crystal in organizing certain kinds of biological research in the mid twentieth century. Here I want to extend that inquiry across the boundary between the sciences, the social and the cultural. My focus is the work of John Desmond Bernal, a key figure in the science of x-ray crystallography, but also central to the Anglophone scientific left from the late 20s through to the cold war. I will look at possible homologies in how Bernal thought about structure in both his scientific and social thought. I then extend the frame to consider the important work Rosalind Franklin did in his lab and Dorothy Hodgkin did as one of his most prominent students. I will also look at how visual iconography drawn from the crystallography of Helen Megaw ended up in textile and ceramic design work for the Festival of Britain after the war. The larger ambition might be to take a media studies and visual culture approach to the continuum of scientific and social concerns of a period which was a high point of political activism and scientific optimism.

Professor Karen Barad will be the official "respondent" to Wark's talk.

McKenzie Wark is the author of A Hacker Manifesto, Gamer Theory, 50 Years of Recuperation of the Situationist International and The Beach Beneath the Street, among other books. He teaches at the New School for Social Research and Eugene Lang College in New York City.

Karen Barad is Professor of Feminist Studies, Philosophy, and History of Consciousness at the University of California at Santa Cruz. Barad's Ph.D. is in theoretical particle physics and quantum field theory. Barad held a tenured appointment in a physics department before moving into more interdisciplinary spaces. Barad is the author of Meeting the Universe Halfway: Quantum Physics and the Entanglement of Matter and Meaning (Duke University Press, 2007) and numerous articles in the fields of physics, philosophy, science studies, poststructuralist theory, and feminist theory. Barad's research has been supported by the National Science Foundation, the Ford Foundation, the Hughes Foundation, the Irvine Foundation, the Mellon Foundation, and the National Endowment for the Humanities. Barad is the Co-Director of the Science & Justice Graduate Training Program at UCSC.

Free and open to the public. Parking permits may be purchased at the pay station located in the Performing Arts lot.