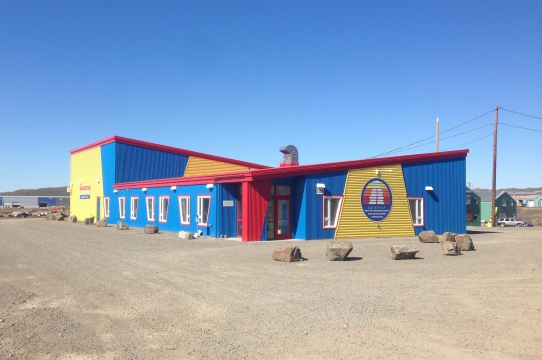 Four years ago, I would have never imagined that being a Visual Studies Ph.D. student would involve tasks such as speaking to committed pro seal hunt activists in Nunavut and collecting stories from reticent nuclear stockpile scientists in Los Alamos, New Mexico. Now, as I begin my fifth year of the program, I feel incredibly thankful to have had the necessary support to gather so much on-the-ground knowledge, all of which has deeply informed my work. My dissertation analyzes the visual culture of self-determination and environmental justice movements led by Indigenous peoples across Turtle Island (the North American continent is referred to as “Turtle Island” in the creation stories of multiple Indigenous nations, and has also been taken up broadly by many other Indigenous peoples and supporters as an anti-colonial moniker for the continent). I contextualize the project with an analysis of the development of colonial visual media – from early colonial maps and paintings to surveillance tools and military weapons, the latter of which motivated my aforementioned trip to Los Alamos, birthplace of the nuclear bomb.

Since beginning my studies in September 2012 as a part of the third cohort, I have been consistently impressed with how supportive everyone involved with the program is of each other. I have an amazing committee, with members from three different departments — Derek Murray (my advisor) and T.J. Demos (both from the HAVC Dept.), Elizabeth Stephens (Art Dept.), and Hiroshi Fukurai (Sociology Dept.). Each of my committee members supports my work in a different way, and I appreciate the diversity of perspectives that they bring.

After completing a draft of my first chapter early last summer, I was awarded a summer research fellowship from the Arts Dean. This fellowship allowed me to travel to Iqaluit, Nunavut, to perform research in connection with the second chapter of my dissertation. Nunavut, as one of Canada’s semi-autonomous Inuit territories, is a significant site for the discourses my project explores. The territory of Nunavut, which means “our land” in Inuktitut, was established in 1999. The long struggle to reach that point, catalyzed by the formation of Inuit Tapiriit Kanatami in the 1970s, is an impressive example of a very recent struggle for Indigenous sovereignty that was, at least in part, successful. Now that the territory is established much work still remains, but Inuit have a strong foundation on which to build the reality that they envision. It was with this in mind that I began looking at the visuality of the ongoing struggle for Inuit self-determination and environmental justice in Nunavut, alongside several movements further south. Some of the projects and organizations I was interested in learning more about were Project Naming, the Place Names Program, the Inuit Film and Video Archives, the #sealfie movement, and the Inuit Broadcasting Corporation. My broader objective, however, was to get a better sense of the social, economic, cultural, and environmental context within which these thinkers and makers are working.

I’m a person who likes to plan, so the lack of reliable internet access in Iqaluit gave me some anxiety regarding my impending travels. Regardless of my numerous attempts to schedule meetings before my arrival, I only managed to finalize two interviews in advance. Once I arrived, I soon realized that most meetings would need to be arranged through personal connections. At that point, I only knew the family I was staying with: Vinnie, Charlotte, and their 1-year-old son Amaujaq. Luckily, Vinnie is highly involved in the Iqaluit art community – he is a performer in the Inuktitut language comedy show Qanurli? and the board chair of Qaggiavuut, an organization that supports Inuit performing arts. Vinnie knew pretty much everyone I wanted to meet with, and connected me with many others who would have remained unknown to me without his help.

During my time in Iqaluit I completed eight interviews, worked in the Inuit Film and Video Archives (which houses all materials created by the Inuit Broadcasting Corporation since its founding), and visited several art spaces. I also went seal hunting, ate mattaaq (whale skin and blubber), learned how to gather clams, and witnessed an impromptu post-barbecue throat singing session. I didn’t document the latter experiences for several reasons. First, throughout this research trip I remained highly cognizant of my positionality as a non-Inuit researcher, and wanted to resist the impulse to document normal social experiences that have often been highly romanticized by outsiders. Second, I wanted to focus on forming social bonds, rather than documenting them. In other words, I wanted to be involved in these experiences, and as Kim TallBear suggests “stand with” the other participants, rather than separate myself from them. Therefore, I don’t have a picture of my experience eating mattaaq, but I assure you it happened and it was quite memorable beyond being delicious. Unfortunately, this mouthwatering food also likely contained high levels of PCBs due to the upward flow of toxins released into the ocean by polluters further south – one example of continued “toxic colonialism” in Nunavut.

One highlight of my research trip was meeting with Zipporah Ungalaq and Lynn Peplinski, who both work on the Place Names Program. The initiative, mandated through the Nunavut Land Claims agreement, seeks to document traditional place names across the territory of Nunavut, replacing colonial/euro-western names with traditional names in the Inuktitut language. Zipporah and Lynn shared many stories about the complex process of learning the place names from elders and hunters in each community, documenting them, and making them official through an arduous government process. Zipporah and Lynn show that while the work of decolonization is often quiet and slow, involving much more than what is displayed in climactic moments of public protest and convergence, that does not make it any less important. The Place Names Program is not only about returning traditional names to the map, but about making visible the longstanding usage of the land, and the histories embedded in that usage. As Peplinski stated during our conversation: “I’ve always had this image in my mind…when you look at maps of the North, it’s all the footprints of explorers. You can sort of see them walking all over the place. Their footprints are everywhere, because the names are there. And the Inuit footprints have been invisible. So that’s what we’re changing, we’re making […] these names visible when they’ve been invisible. They’ve been invisible even to younger Inuit” (Lynn Peplinski, interview with the author, July 28, 2016). Importantly, the maps produced by the Place Names Program, in collaboration with community members across Nunavut, tell a different story than maps produced by colonial explorers, the military, and resource prospectors. Rather than erasing the longstanding history of Inuit living and thriving on the land and sea to make room for the names of military bases, explorers, and mines, these maps tell the stories of those who have an intimate familiarity with the land as a source of intergenerational knowledge and sustenance.

A significant turning point in my research was learning more about the connection between the seal hunt and sovereignty. There has been a long and highly visible campaign to eliminate the practice of seal hunting in the north, endorsed and facilitated at different points by non-profit organizations such as Greenpeace, as well as government bodies in Canada and the EU. The ethics and sustainability of the seal hunt is a central point of contention. Many Inuit argue that external government regulations on the sales of locally caught and produced seal products are a continuation of the longstanding legacy of colonial impositions on Inuit sovereignty (Please note: this is a summation of the sentiment that was communicated to me during and after my time in Iqaluit, but I certainly cannot speak for Inuit. For an account of these issues by Inuit, please see Alethea Arnaquq-Baril’s award-winning recent film, Angry Inuk). Non-profit organizations, bolstered by the support of celebrities such as Pamela Anderson and Paul McCartney, spread propaganda featuring cute baby seals, arguing that the gathering, production, and sale of seal products is unethical and unsustainable. There is no evidence to support these statements in relation to the Inuit seal hunt, and virtually no regard for the impacts of anti-seal hunt policies on Inuit, many of whom rely on seals as food and as a source of income. Before arriving in Iqaluit, I was aware of some of the creative work that had been produced on the dynamics around hunting and sovereignty —Arnaquq-Baril’s Angry Inuk and the #sealfie movement, for instance. While in Iqaluit, through conversations with almost everyone I met, the magnitude and complexity of this issue became even clearer. While at a dinner celebrating the work of a team of female snorkelers (who were snorkeling the Northwest Passage to raise awareness about climate change), I was introduced to pro seal hunt activist and seal skin seamstress Aaju Peter. Although our dinner meeting was relatively short, the conversation led to the opportunity to conduct a substantive interview about art, the seal hunt, and sovereignty following my return to Brooklyn. Aaju has now become a very important interlocutor. My relationships with other artists, activists, and community members I met in Iqaluit have also continued to grow.

I recently presented a paper that draws upon the research I completed in Nunavut at the unfortunately titled Inuit Studies Conference in St. John’s, Newfoundland. I am currently expanding that paper into the second chapter of my dissertation, planning a research trip to North Dakota in relation to the next chapter, co-organizing a Wikipedia edit-a-thon on Indigenous peoples’ justice, writing a short article for the Journal of Aesthetics and Protest, applying for dissertation completion grants, and preparing the three courses I’ll be teaching next semester as a visiting Assistant Professor of Art History at Alfred University (“Land, Sovereignty, and Art,” “Indigenous Visual Culture in the U.S. and Canada,” and “Art Activism”). It’s certainly a busy time, but it should be – there’s a lot of work to be done on these topics, and I am eager to continue.