The Migrant Image: The Art and Politics of Documentary during Global Crisis 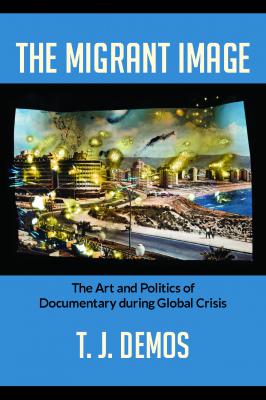 In The Migrant Image—winner of the prestigious 2014 College Art Association Frank Jewett Mather Award for Art Criticism—T. J. Demos examines the ways contemporary artists have reinvented documentary practices in their representations of mobile lives: refugees, migrants, the stateless, and the politically dispossessed. He presents a sophisticated analysis of how artists from the United States, Europe, North Africa, and the Middle East depict the often ignored effects of globalization and the ways their works connect viewers to the lived experiences of political and economic crisis. Demos investigates the cinematic approaches Steve McQueen, the Otolith Group, and Hito Steyerl employ to blur the real and imaginary in their films confronting geopolitical conflicts between North and South. He analyzes how Emily Jacir and Ahlam Shibli use blurs, lacuna, and blind spots in their photographs, performances, and conceptual strategies to directly address the dire circumstances of dislocated Palestinian people. He discusses the disparate interventions of Walid Raad in Lebanon, Ursula Biemann in North Africa, and Ayreen Anastas and Rene Gabri in the United States, and traces how their works offer images of conflict as much as a conflict of images. Throughout Demos shows the ways these artists creatively propose new possibilities for a politics of equality, social justice, and historical consciousness from within the aesthetic domain.

“If you ask me, what is the best book on art of the 2010 decade, or even the twenty-first century so far, I don’t hesitate for a second to mention a book that I spent a week of alleged holidays to reread, in detail, as intellectual comfort food in my pessimism over the low quality of art writing, whether it be art history or catalogue essays. No other book offers such a perfect balance of theorizing, close reading of art works, activism and philosophy. . . . The book is so rich, one could teach an entire semester seminar on just its basis. Watching the videos, websites, photographs he analyzes and reading his commentaries is the best education in the arts—and in politics—one can dream of. . . . This book is a true masterpiece of scholarship as I like it—of what I call ‘cultural analysis’ with an activist edge. This is simply the best book on the aesthetics-politics bind I have read—ever. My admiration is immense; but so is my joy in reading finally something that makes scholarship exciting again.” — Mieke Bal, Dutch cultural theorist, video artist, and Professor Emeritus in Literary Theory at the University of Amsterdam

“The Migrant Image provides an in-depth study of contemporary art in a global context, read through the specific lens of migration. T. J. Demos offers a seamless bridge between a critical and informed art history and an authoritative presentation of the socio-political interests that are essential to contextualizing each artist’s practice. The achievement of The Migrant Image is to provide a full and rich justification for our paying attention to these works as multi-layered and probing artistic gestures that also have the capacity to renew a political imagination.”  — Claire Bishop, author of, Artificial Hells: Participatory Art and the Politics of Spectatorship

“T. J. Demos has established himself as a leading critic of politically engaged art, especially as it pertains to the main topic of this book, migration in the more general sense, and migration under late modern, late capitalist globalization. Nowhere else can readers access so many profiles of key works by these artists, or see their work read so deftly and thoroughly from relevant theoretical perspectives.” — Terry Smith, author of, Contemporary Art: World Currents

“The Migrant Image is an important reflection on a form of art practice marked by the ‘posts’ of postmodern critique and a political commitment to oppose prepackaged discourses of crisis, austerity, and futile resistance. In a timely way, Demos shows the two are compatible. The Migrant Image will stimulate fascinating debates in the academic, artistic, and documentary spheres. In triangulating among these camps Demos brings down the barriers separating them.” — Alex Fattal, Public Books

“Think of T.J. Demos’s The Migrant Image as a field guide to art for those interested in the politics of human rights, globalization, migration, and war.” — Ryan Wong, Hyperallergic

“T. J. Demos’s The Migrant Image is the most comprehensive and in-depth scholarly investigation of the effects that globalization has had on contemporary artistic practice over the past three decades. The scope of Demos’s investigation is impressive, most notably in his unpacking and explication of key terms in global art discourse that have proven problematic, and at times elusive. The effects of globalization on creative and intellectual practices in the arts has been a controversial subject that has eluded easy consensus – and Demos skilfully brings a much needed legibility to a discussion that is as divisive as it is complex.” — Derek Conrad Murray, Third Text

“Each of the nine case studies provides close examination of work by an artist, a team, or a collective. The broader discussions should also be of interest, particularly for readers in art, communication/media studies, film, political science, and sociology...Recommended.” — J. Decker, Choice

“Demos’s deft criticism means that he is able to bring together a broad range of artwork and argue very persuasively in each case for its effectiveness. . . . His authorial voice rings crystal clear throughout the analysis of this range and mix of artistic practice.” — James Day, Art History

“With a wide and deep knowledge of visual studies and contemporary art theory, Demos is able to provide both historical perspectives and contemporary re-actualisation of issues raised in the book. A commendable ability to draw philosophy, cultural and postcolonial studies and critical theory into the debate is also to be remarked. The methodology is almost flawless. The attention given to the audiences’ engagement and to the centrality of the body and its embodied thinking practices in the overall experience of contemporary art is also to be underlined. Displacement is presented in the text as both the subject and the terms of reception of artworks, creating a sensory disorientation that Demos reads as a strategy for ‘affective politics’. In addition to this, Demos’ clear and elegant prose, a very strong structure and a useful selection of images add up to the book’s merits.” — Beatrice Ferrara, Interartive

"TJ Demos makes a compelling contribution with this book to the discussion within contemporary visual studies that seeks to re-think the political significance of art for the struggles of our post-2001 present. … [T]he many qualities of this book energise our desire to know our neoliberal enemy better, meticulously question our complicities with it and to imagine transformative encounters with the images and sounds of the world." — Manuel Ramos Martínez, Journal of Visual Culture

"Framing contemporary artworks dealing with the theme of migration within the twenty-first century context of 'crisis globalization,' Demos engages with a growing and interdisciplinary body of scholarship on neoliberalism and uneven development. The book’s main intervention, however, is within the subfield of global contemporary art history, where it will serve as a very useful text for students, researchers, critics, and curators concerned with the relationship between art and politics in the post–September 11 era."  — Tammer Salah El-Sheikh, Arab Studies Journal