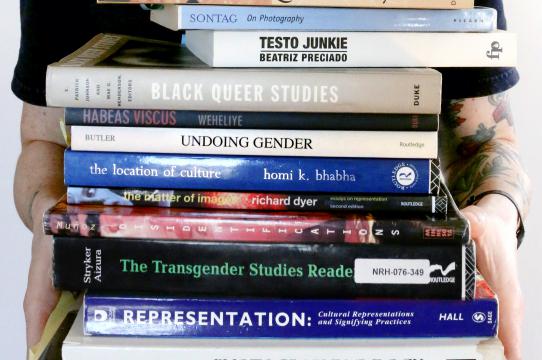 Ace Lehner is currently working on a visual studies research project investigating the politics of trans and gender non-conforming representations in contemporary culture (mainly in the United States). Building on methods forwarded by cultural studies founder Stuart Hall, the project surveys a variety of visual culture forms in order to comprehend how identity categories are being proposed, contested, and negotiated in the visual field. Ace is interested in actively working to undo the partitioning of various identity-based discourses from one another in efforts to better understand the complexity of the ways visual culture relates to the constitution of identity categories. Looking at film, photography, magazines, and selfies, the project embraces interdisciplinarity to thoroughly attend to the interconnectedness of gender, ethnicity, racialization, and class as they relate to corporeality, representation, and systems of identity regulation. The books Ace is sharing here are either demonstrative of this type of approach in their praxis or their methodologies are foundational to probing such concerns, and they all are significantly impactful regarding their current work.