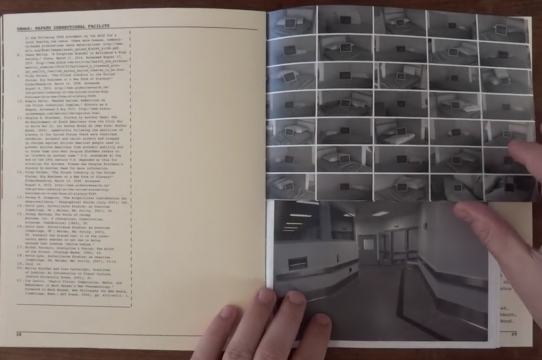 THE ARTIST COLLABORATIVE PROJECT ERNEST of which Ace is a part of, recently produced an artist book as part of a residency at c3 Initiative in Portland, OR. Ace's essay, entitled Surveilling Emptiness at Wapato Jail is included in the book.

Unlike most empty prisons, Wapato Correctional Facility’s 525 beds are not haunted by ghosts, instead pristine pillows rest atop heinously cheap and hideously green mattresses that have never been slept in and do not hold indentations made by the weight of past trauma. There are no stains, no hairs, no traces of human suffering. Completed in 2004 the Multnomah County jail has stood empty till today and while it has often been described by locals as an albatross, it might more fittingly be considered a physical manifestation of Jeremy Bentham’s conception of the Panopticon. For, like Bentham’s Panopticon -a conceptual structure that, never actually housed any prisoners- Wapato Jail’s surveillance cameras perpetually watch over constant emptiness.

Demos: Wapato Correctional Facility was comprised of a video, publication, limited edition print and a roundtable event.  Acting as a conjuror of sorts, the character of Coyote leads the video component of Demos, transforming the specific architecture, history and politics of Wapato Jail into a platform for conversation and collaboration. The project’s publication is created in collaboration with Portland art press, Container Corps, and includes a collection of essays, artworks, research, and primary documents. Its contents are both specific to Wapato Correctional Facility, and related to general issues of incarceration, participatory citizenship, and the role of art in social justice and storytelling. The roundtable component of Demos provided a platform for exploration, open conversation, and a broadened investigation of themes relating to the empty jail facility, both locally and nationally.