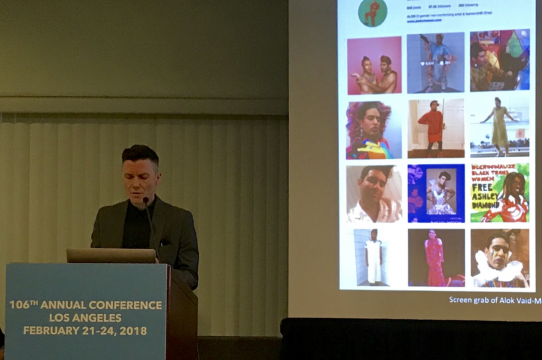 Due to their ubiquity, relative accessibility and immediacy, selfies have become the primary venue for galvanizing trans and non-binary identities. In this paper I argue the disdain selfies have garnered from the art world and culture at large, can best be understood as a political reaction to their radical redefining of who has the power to image whom and how. Bringing together photography theory, trans studies, gender studies and critical race studies, I discuss non-binary selfies as radical forms of performative self-portraiture. Looking closely at the Instagram feed of trans, non-binary, femme, performance artist, and spoken word poet Alok Vaid-Menon, this paper argues their production of non-binary, trans-femme iconography in the form of selfies and useis, presents complex, expansive, and intersectional identities. I also contend these selfies force us to redefine self-portraiture and reconsider the ways matrixes of gender and racializing assemblages are affixed to bodies via visual encounters. Vaid-Menon’s oeuvre not only produces new visual exemplars for others to model themselves after, but their Instagram feed (as well as others like it) constitutes necessary antidote to the stereotypes, and erasures of such constituencies imaged by dominant culture.