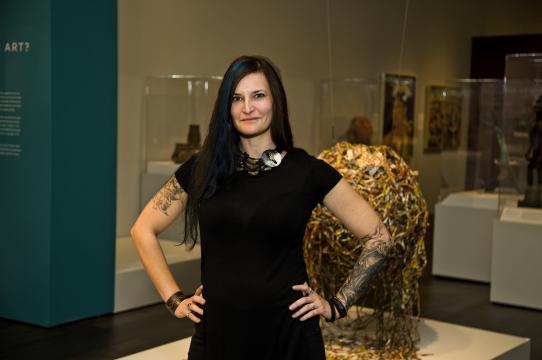 While serving as the Cantor Art Center’s Curatorial Fellow in African and Indigenous American Arts at Stanford University, a position which began March 6, 2017, Amanda M. Maples curated one permanent exhibition and two special exhibitions on African arts. Opening in September of 2017, the permanent installation is a reimagining and reinstallation of the Thomas K. Seligman Gallery of African Art and is entitled In Dialogue: African Arts. Juxtaposing tradition-based with contemporary African and diaspora arts, the exhibition considers the arts of Africa to be rooted in a deep and rich history that is locally, as much as globally, connected—by extensive trade routes and migrations of not only people, but ideas and arts both on and off the continent.

The first special exhibition opened in the Rowland K. Rebele Gallery on March 21, 2018. Entitled The Dancing Sowei: Performing Beauty in Sierra Leone, it similarly takes an in-depth look at one historic work from Sierra Leone and explores the many changing meanings that surround the mask in the museum space, in contemporary and global politics, and as envisioned and performed by women. In a companion gallery another special exhibition on African arts features a recent donation secured by Maples. Entitled Alphabété: The World Through the Eyes of Frédéric Bruly Bouabré, it explores two rotations of drawings by this singular Ivorian artist, whose oeuvre poetically incorporates knowledges from all over the world as a way to celebrate and unite the world’s cultures through art. This second special exhibition opened June 20, 2018 in the Patricia S. Rebele Gallery, and both will continue until February 25, 2019.