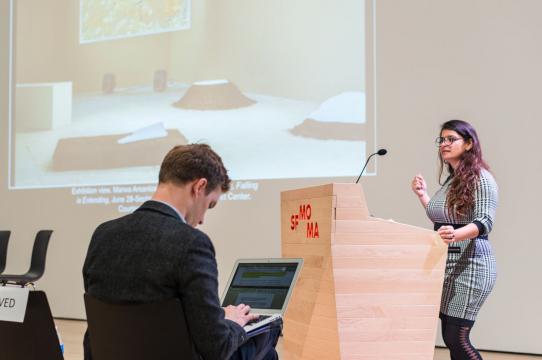 In the context of A Line in the Sand: Art, Ecology, and Precarity, this year’s iteration of the annual Berkeley/Stanford symposium, I presented a paper titled “Falling is Not Collapsing: Waste Histories and Capitalist Desire in the Realm of Flora.” It is my reading of and around Falling Is Not Collapsing, Falling Is Extending (2016-17), an interdisciplinary research and artistic project by the Beirut-based artist Marwa Arsanios. Arsanios exposes the link between waste accumulation and real-estate, part of the postwar wave of privatizations through successive neoliberal governments since the end of the civil war in 1990. Crucially, she reveals how waste became a strategy to seize coastal lands in Lebanon and erect luxury condo towers and exclusive beach resorts. I argued that by going to the landfills, including the fifty-meter tall “garbage mountain” in Bourj Hammoud (a suburb of Beirut), and getting close to a precarious waste ecology, including thorny weeds and tires, Arsanios defies the power of smell which has created a nonphysical border that deters communities from reclaiming the land. This olfactory border maintains a hygiene-and-containment-based separation between people and waste-occupied land, which works in the interest of real-estate as the latter turns it into an operational landscape. In this sense, the so-called “garbage crisis,” ongoing in Lebanon, is perpetual through the rule of real estate which I have come to term “real-estate governmentality." I coined this political-theoretical metonym in reference to postwar governance: it destroys local ecologies, privatizes land, and acts in service of the real-estate economy and against public interest.