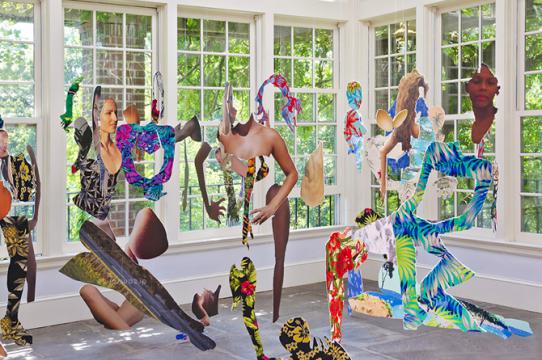 The essay Joiri Minaya: Of Undoing Images investigates the ways in which Dominican-American artist Joiri Minaya has articulated the notion of the visuality of  “tropicalness” to expose the conflation of the categories "nature and women" on the cyberspace. First installed at the Wave Hill Project Space in the Bronx, New York, in #dominicanwomengooglesearch (2016), Minaya used images found during a Google search for “Dominican women.” Amateur photographs that she identified as “representations that are exotic and obedient to foreign fantasies, yet seemingly assertive and self-confident” were chosen from the search results. From these low-resolution images Minaya digitally excised specific body parts using Photoshop, later blowing them up so that she could print them at human scale. In the installation, one sees printed images of various female body parts hanging from the ceiling; on the verso appear colorful, tropical flower-patterned fabrics.  The work’s appeal resides in its play between the indexical and the phantasmagoric qualities of digital images––and of the female bodies depicted in them. Although the cutouts are printed at human scale, Minaya retains the digital pixilation that results from their enlargement, reminding viewers that these are low-quality images made for screens.