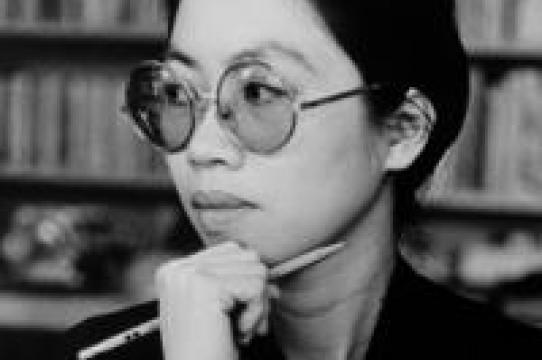 Professor Trinh teaches in the Gender and Women's Studies Department at the University of California at Berkeley since 1994 and in the Department of Rhetoric since 1997. She has also taught at Harvard, Smith, Cornell, San Francisco State University, the University of Illinois, Ochanomizu University in Japan and the National Conservatory of Music in Senegal. Originally trained as a musical composer, who received her two Masters and Ph.D. from University of Illinois, Champaign-Urbana, Trinh T. Minh-ha is a world-renowned independent filmmaker and feminist, post-colonial theorist. She teaches courses that focuses on women's work as related to cultural politics, post-coloniality, contemporary critical theory and the arts. The seminars she offers focus on Third cinema, film theory and aesthetics, the voice in cinema, the autobiographical voice, critical theory and research, cultural politics and feminist theory. Aside from the eight books she has published, her work also includes two large-scale multimedia installations and six feature-length films that have been honored in twenty seven retrospectives around the world: Reassemblage (1982), Naked Spaces (1985), Surname Viet Given Name Nam (1989), Shoot for the Contents (1991), A Tale of Love (1996), The Fourth Dimension (2001), and Night Passage (2004).  She is currently at work on a large-scale audio-visual installation for the Musée du Quai Branly in Paris.