"Media Fabric: A History, Theory, and Practice of Textile Reuse" 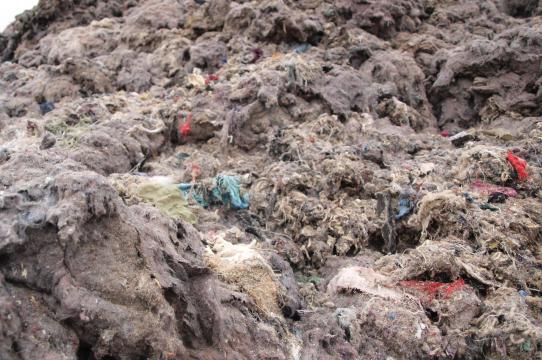 Hanna Rose Shell, a historian of science and technology, and a media maker, is an Associate Professor of Science, Technology and Society at MIT, and an affiliate in Comparative Media Studies. Shell will give a free talk titled, "Media Fabric: A History, Theory, and Practice of Textile Reuse."

Shell received a Ph.D. in the History of Science (Harvard, 2007) and an M.A. in American Studies (Yale University, 2002). In both her text and film-based scholarship, Shell studies the production, use, and transformation of often marginalized artifacts, located at the interstices of the found and the fabricated. Her current book project is a historical and theoretical investigation into the epistemology of reuse, in which objects of analysis include old clothes, decomposing vegetable matter, and other artifacts of strategic repurposing. Works from the last year include the scholarly article and media essay "Cinehistory and Experiments on Film," published in Journal of Visual Culture (Dec 2012) and the book Hide and Seek: Camouflage, Photography, and the Media of Reconnaissance, published by Zone Books (2012).

Clothing is a circulating technology that is also a medium of social transmission. It becomes, as it has for millennia, both the means and the site for storage and the spread, and the withholding, of information. Clothes wear upon us as we wear them. Temporary prostheses, they are shaped by the demands of body become inscribed with markers of a given body’s history; this remains the case even after they are shredded into bits and refashioned. This talk examines the status of what I call textile media through an inquiry – verbal and visual –into vestments’ transformation into detritus and beyond.