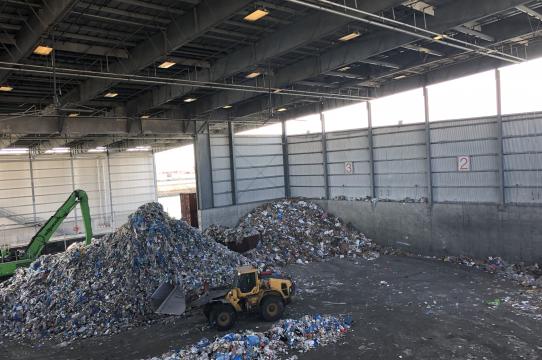 In this talk, Professor Davis will examine how materiality became plastic, in both the metaphorical and literal senses. Plastic matter describes the way that plastic has materially transformed the world due to its incredible longevity and range, its imbrication in so many bodies and ecosystems. Plastic matter also, importantly, describes how the materiality of plastic has then been transposed on to our expectations of matter more broadly, how we have come to see matter itself as inherently pliable, disposable, and consumable. Plastic is a way to understand the Western conception of matter, how matter itself is impressed with ideas of plasticity. Plastic matter refers to the amorphous, shape-shifting qualities of fossil fuel–derived materials, plastic’s plasticity, and our understandings of materiality refracted through the iridescent surfaces and deflective capacities of oil.

Heather Davis is an assistant professor of Culture and Media at Eugene Lang College, The New School. Her current book project, Plastic Matter, argues that plastic has transformed the material world due to its incredible longevity and range, as it has also transformed our understandings and expectations of matter and materiality. She is a member of the Synthetic Collective, an interdisciplinary team of scientists, humanities scholars, and artists, who investigate and make visible plastic pollution in the Great Lakes. Davis has written widely for art and academic publications on questions of contemporary art, politics and ecology, and has lectured internationally, including at the MoMA, Columbia, MIT, Sonic Acts Academy, Haus der Kulturen der Welt, Transmediale, the National Gallery of Canada, Ashkal Alwan, and the Yinchuan Biennale. She is the co-editor of Art in the Anthropocene: Encounters Among Aesthetics, Politics, Environments and Epistemologies (Open Humanities Press, 2015) and editor of Desire Change: Contemporary Feminist Art in Canada (MAWA and McGill Queen’s UP, 2017). Her writing can be found at heathermdavis.com.