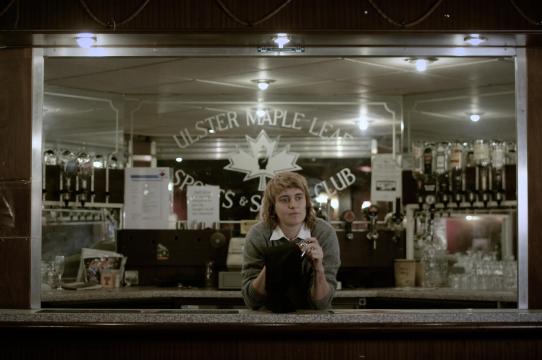 Mariah Garnett mixes documentary, narrative and experimental filmmaking practices to make work that accesses existing people and communities beyond her immediate experience. Using source material that ranges from found text to her own father, Garnett often inserts herself into the films, creating cinematic allegories that codify and locate identity. Her films and installations deconstruct the conventional hierarchy between filmmaker and subject, a mode that has historically been the purview of directors who are economically, racially and gender privileged. By including her own image, Garnett positions queerness in relationship to subject matter that on the surface may seem disconnected from LGBTQI identity. The works simultaneously acknowledge a natural human desire for contact with others, and the legacies of abuse and "othering" that have surrounded the mediation of that desire through history. In this way, Garnett creates a space in her films where more than one thing can be true. For her talk at UCSC, Garnett will show clips from films and installations completed over the last decade, focusing on her process and research, and culminating in a presentation of her most recent and most ambitious work to date, Trouble.

Mariah Garnett is an artist and filmmaker who lives and works in Los Angeles. Her work ranges from installation to single channel, experimental narrative and documentary film. Its focus is how relationships are mediated through the camera, and the power dynamics at play in that exchange. She holds an MFA from CalArts in Film/Video and a BA from Brown University in American Civilization. In 2019 she was named a Guggenheim Fellow, had a ten-year survey exhibition at Los Angeles Municipal Art Gallery, and premiered her first feature film, Trouble, at the BFI London Film Festival and at the New York Film Festival’s Projections. Her work has been exhibited and screened internationally at venues including The New Museum, The Tate Belfast (MAC Centre) Ann Arbor Film Festival, REDCAT, and The Hammer Museum. She is represented by Commonwealth & Council.