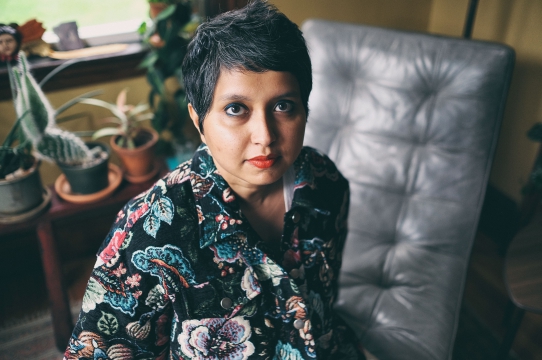 In the field of documentary, voice, rather than point of view, is the prevailing metaphor for a filmmaker’s unique perspective, signaling the genre’s emphasis on spoken words, as well as its enduring social mission of “giving voice.” This talk will unpack the humanitarian resonances of this metaphor, as elaborated in Immediations: The Humanitarian Impulse in Documentary (Duke UP 2017). In conversation with recent scholarship on race, sound, and listening, Rangan discusses how documentary’s vocal conventions can normalize as well as undermine the hierarchies of race, gender, and other axes of difference implicated in the practices of giving voice and bearing witness; reframing “voice” as an audibility which disciplines norms of speaking, listening and being human.

Pooja Rangan is Assistant Professor of English in Film and Media Studies at Amherst College. She is the author of Immediations: The Humanitarian Impulse in Documentary (Duke UP 2017), and of numerous articles in journals including Feminist Media Histories, Film Quarterly, Camera Obscura, World Picture, and differences. Rangan is the co-editor, with Genevieve Yue, of a forthcoming special issue of the journal Discourse on “Documentary Audibilities.” Her current research deals with the politics and aesthetics of accented speech and listening.

The annual Visual and Media Cultures Colloquia (VMCC) at UCSC are a collaboration between the graduate programs in Film and Digital Media Department and Visual Studies in the History of Art and Visual Culture Department. The series brings an array of cutting-edge scholars to speak on a broad spectrum of subjects. Talks are free and open to the public. Parking permit required.  https://taps.ucsc.edu/parking/visitor-parking.html.