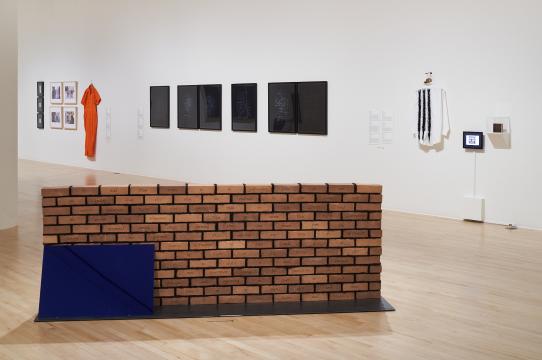 Barring Freedom is on view at San José Museum of Art through April 25, 2021, Friday through Sunday, 11am–5pm.

Barring Freedom explores our nation’s troubled history of prisons and policing. In the last forty years, the number of people in prisons, jails, and detention centers in the United States has grown by 500%. There are now two million incarcerated individuals, the majority Black or brown and predominantly from poor communities. One out of every twelve families in the country is directly impacted. Yet, for many who have not been directly affected by policing and incarceration, this societal shift has happened largely out of sight, buried within national debates around history, racism, law, and order. The artists in Barring Freedom creatively confront the historical and racialized biases within the criminal justice system and the economic and social problems that the system serves to obscure.

The artworks included in Barring Freedom also envision a future beyond the prison. They underscore the importance of art to highlight and inspire reflection about these challenges and emphasizes the critical roles artists play in imagining and creating new worlds built on true equality.

Admission is free for UC Santa Cruz students. You can order tickets here.

Barring Freedom is co-organized by UC Santa Cruz Institute of the Arts and Sciences and San José Museum of Art.