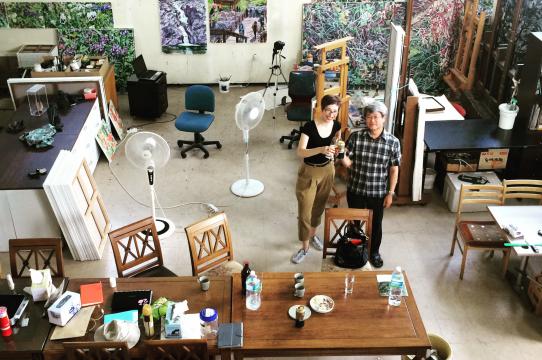 In 2008 I moved to Samcheok-si, Gwangwon-do, South Korea, a small rural town nestled among stunning coastal cliffs rising above the East Sea and farmland peppered with local vegetables and fruits.* I taught English in an even smaller town, and was welcomed with open arms into a world of unknowns. My move to South Korea was meant to take me on adventures around a region of the world I’d never encountered. That it did. In addition, moments from my everyday life sparked questions that became my life’s work.

After almost two years in Korea, I returned to the United States to pursue a master’s degree in Visual and Critical Studies at the School of the Art Institute of Chicago (SAIC). During my M.A. studies, I quickly began writing about body and gender in contemporary South Korean art and culture. My mentors at SAIC encouraged me to pursue a Ph.D. degree and highly recommended the Visual Studies (VS) graduate program of the History of Art and Visual Culture (HAVC) Department at University of California, Santa Cruz. After rigorously searching for doctoral programs, I realized that VS at HAVC was one of the few places I could cultivate my specific interests in South Korea in regard to gender and the body. Through the guidance of UCSC faculty, especially my advisors Jennifer Gonzalez and Boreth Ly, I have maintained that focus and simultaneously broken open new angles, questions, and theses that energize my research.

Through generous support from the Visual Studies Travel and Research Grant and the Arts Dean’s Fund for Excellence, I returned to South Korea for the summer of 2015 to conduct research and participate in a five-week intensive language program. In an attempt to not limit my research, I treated my trip as a fact-finding mission. During six weeks spent in Seoul I visited about thirty gallery and museum exhibitions, conducted six artist interviews, met with ten curators and arts scholars, and researched exhibition catalogues and art journals at the Arko Art Archive. I also learned some Tae Kwon Do, ate all the kimchi I could find, and discovered and regularly frequented the Gentle Monster storefront in Hongdae.

One of my most memorable days was spent with Professor Kwon Yeo Hyun who was artist in residence at UCSC from 2013-2014. I met Professor Kwon one morning at Kookmin University. We took a tour of the art facilities, met in his office, looked at some of his paintings, and then went to his solo exhibition, The Pond of Ophelia, at L Jung A Gallery. We watched one of his films which was in part made during his time at UCSC. Professor Kwon’s colleague, Professor Oh Byung-wook, an art critic and painter, joined us for lunch and promptly invited us to his studio outside the city. The studio was a enormous, open, two-storied room surrounded by a charming garden that Professor Kwon likened to something one would find in the English countryside; there were also chickens. While touring the studio and viewing his artwork that predominantly covers the wall space, Professor Oh discussed his artistic vision and made observations about his colleague’s artwork. The two professors share significant affinities in their paintings--the main one being that they make work that challenges the notion of narrative using compositions laden with nature to complicate temporality.

Professor Kwon’s paintings contain figures surrounded by lush, whimsical expanses of nature. The paintings exemplify a state of time attempting to subvert narrative readings. Professor Oh’s artworks rarely contain human subjects; many of his painting are larger-than-life expanses of natural settings, such as his garden, that he reconfigures in the studio space. Although their artwork doesn’t speak directly to my specific area of focus, learning about it situates the material that I’m researching in the rich ecosystem of contemporary South Korean art.

One evening in Seoul, I was fortunate enough to meet Violet Kim, the writer of a nationally broadcasted radio program called Koreascape. She asked me to be a guest on the radio program for a broadcast called Theory of Korea. During the segment, host Kurt Achin and I discussed my work as an artist and scholar, and how I came to focus on South Korea. We also explored the place of South Korea in the global art world, artistic trends in Seoul, and issues of gender within its artistic and social landscape. It was a privilege to have a conversation about my ideas on such a vast stage. After spending several weeks in Korea, this opportunity to verbalize my thoughts led me to a more succinct understanding of the trends I perceived. For example, Kurt Achin observed that most of the artwork I was referencing was new media and film, whereas I’m usually drawn to installation art, sculpture and photography. This development does not necessarily speak to my particular area of study, but does reflect the trajectory of the formal makeup of artwork on exhibition in Seoul.

My final meeting in Seoul this summer was with Chang Jia, an artist I’ve worked with since my first research trip in 2011. The last time we met was in New York in 2014 when she was an artist in residence at Doosan Gallery to prepare for her exhibition as a nominee for the Korean Art Prize. During that visit I toured the solo exhibition of Chang’s work, visited her studio, discussed her works in progress, and was interviewed for a nationally broadcasted documentary about the four Korean Art Prize nominees. Chang approaches her subjects with a creative eye and renders them with attention to technical excellence. Her work is provocative and encourages the viewers to exist outside of their comfort zone in a visceral and often unsettling manner, which is what initially drew me to her work. (In fact, it was an essay on her art that I submitted as a writing sample with my application to VS at HAVC). I first encountered Chang’s work at her solo exhibition, I Confessin 2011. Among her art pieces was the larger than life photograph, Sitting Young Girl (2009). The image is of a nude young woman with her back to the camera sitting erect atop a large glass bowl full of live eels. Chang’s subject matter is of the abject and the unseen; through her art practice she brings displaced cultural conditions to the forefront in an attempt to highlight and interrogate the associated taboos.

Chang and I usually communicate with each other through a colleague who generously translates, Sabina Yeowoon Lee. Chang often understands my English but prefers to respond in Korean. This meeting was different: although we didn’t speak entirely in her native language, I was thrilled and stunned to find that for part of the meeting we were communicating in Korean. I still have a lot of work to do both in regard to language study and research, but my conversations with Chang were a wonderful marker of progress in my studies.

Although my trip was incredibly fast paced, I left Korea reinvigorated, eager to return, and full of fresh ideas. Outside of the new media trend mentioned in the radio interview (which is not necessarily specific to South Korea), I noticed a few consistent conversations while in Seoul. First, there is a generational gap occurring within the art community: not necessarily an age gap but a gap between two groups that use different resources. One group has been almost fully funded by government supported projects for the last few decades, but that pot of money is beginning to run out. The other group does not have access to those depleted funds and is pursuing more grassroots exhibitions and art projects. I hope that within that space further nuanced approaches to identity politics will emerge.

Second, Korea has recently become a major player on the global political and economic scene and this new development presents an especially interesting environment for the circulation of art and artists: nationalism as an identity factor intertwined with the cosmopolitan character of the global art scene is a multilayered lens through which to engage the artwork and their makers. This is not a trend unique to South Korea, but in the Korean context it produces specific outcomes, modes, and situations.

My focus on gender and the body was born out of my time spent living in Samcheok. There I learned of and partially existed within the social hierarchy in which treatment of gender is rooted in South Korea, spawning my interest in gender outside of binary and culturally constructed norms. During my recent brief visit to Seoul, I realized that an extended stay is necessary to further develop the relationships and conversations I’ve cultivated thus far. My last three research trips to Seoul were full and fruitful but didn’t allow me to fully immerse myself in the material. In the meantime, while back in the States, I will continue to pour over the artwork, build my network both locally and in Seoul, study the language, and make plans for my next adventure.

*Throughout this narrative I refer to South Korea as both "South Korea" and "Korea" not to be confused with North Korea.

Image caption: Kate Korroch and Oh Byung-wook in his studio outside of Seoul